The 17th anniversary of the CSTO Joint Staff creation 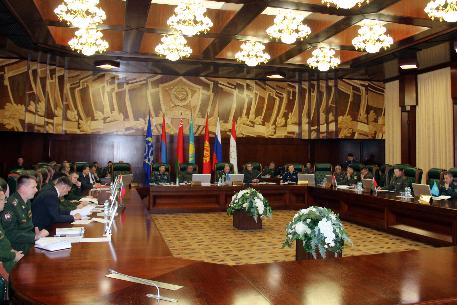 Today, within the framework of preventive measures, the Organization actively utilizes the capabilities of the CSTO Crisis Response Center, closely interacts with the ministries and departments of the Organization's member states, and monitors the military-political and epidemiological situation in the collective security regions.

Speaking about the 17th anniversary, the Head of the CSTO Joint Staff, Colonel General Anatoly Sidorov noted that the team successfully completed all the tasks over the past year. He also expressed confidence that henceforth, the personnel of the Joint Staff, despite the pandemic, will show high professionalism, coordination in work and a creative approach in solving problems aimed at improving the Collective Security Treaty Organization of the Collective Security Treaty Organization.

The main efforts in the activities of the multinational staff of the Joint Staff last year were focused on organizing the implementation of decisions of the CSTO state heads, heads of defense departments on the development of the military component of the Organization and improving crisis response mechanisms.

In 2019, the most important document for the development of the military component of the Organization was prepared - the draft Plan for the Development of Military Cooperation of the CSTO Member States for 2021-2025. The Plan defines the further priorities of coalition military construction for the medium term.

Within the framework of the joint operational-strategic training “Combat Brotherhood-2019”, the following events were organized and successfully held: a joint business game, a series of trainings with the CSTO Troops (Collective Forces) components, with reconnaissance forces and means, and for the first time in the CSTO format, a special training with forces and means of logistics "Echelon-2019".

The Joint Staff is entrusted with the tasks associated with the formation, functioning and use of the Troops (Collective Forces), the preparation and holding together with the defense departments of the Organization member states of joint operational events and combat training, military-technical cooperation, coordination of joint training of personnel and specialists for the armed forces of the member states, as well as with the organization of the functioning of the CSTO Crisis Response Center.