The 18th anniversary of the CSTO Joint Staff creation 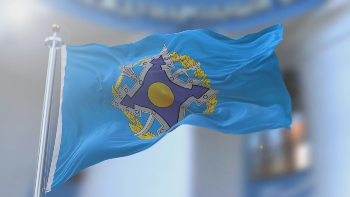 The Joint Staff is tasked with forming, operating and using troops (Collective Forces), preparing and conducting joint operational and combat training activities together with the defense departments of member states, military and technical cooperation, coordinating joint training of personnel and specialists for the armed forces of member states, and organizing the functioning of the CSTO Crisis Response Center.
Speaking about the 18th anniversary, Colonel General Anatoly Sidorov, Chief of the CSTO Joint Staff, noted that the authority won by the multinational team of the CSTO Joint Staff throughout its existence allowed us at present to take an active part in building the military component of the CSTO collective security system, in ensuring a peaceful future, the integrity and stable development of our states.
All these years the activity of the Collective Security Treaty Organization Joint Staff has been aimed at organizing the implementation of decisions of the heads of CSTO member states and heads of defense establishments, development of the military component and crisis response mechanisms, as well as improvement of the CSTO regulatory framework, taking into account the priority areas proposed by the states during the period of their chairmanship in the CSTO.
One of the main results of the past year is the completion of the preparation of the fundamental document for improvement of the military component of the organization - the Plan for the development of military cooperation of the CSTO member states for 2021-2025, which was approved in 2020 in the course of the December session of the CSTO Collective Security Council.
In developing the components of the CSTO troops (Collective Forces) jointly with the CSTO Secretariat and defense establishments, the main focus was on improving the composition, training and equipment of the CSTO Peacekeeping Forces contingents. In order to involve the CSTO peacekeeping potential in international peacekeeping activities under the auspices of the United Nations, a special medical unit of the N. N. Burdenko General Military Clinical Hospital was included in the CSTO Peacekeeping Forces. The establishment of a joint (combined) medical formation of CSTO member states – a medical detachment (special purpose) as a medical support unit - has been initiated.
As part of work on the issue of joint response of CSTO member states to pandemics and carrying out humanitarian missions, the CSTO Joint Staff, taking into account proposals from the Russian Ministry of Defense, has prepared and sent for consideration to the defense departments a set of documents on the creation, under the aegis of the CSTO, of a joint unit for radiation, chemical and biological protection and medical support.
At the initiative of the CSTO Joint Staff, the CSTO Parliamentary Assembly adopted the recommendations for improving the legislation of the CSTO member states regarding the organization of international flights by armed forces aviation, other troops and military formations in 2020.
Work continued to improve the joint operational and combat training of command and control bodies and formations of the assets of the CSTO collective security system. Last year alone, a strategic command and staff training using the resources of the CSTO Crisis Response Centre, a special training "Echelon-2020" with the assets of the Acquisition, Technology, and Logistics, and a command and staff training with the CSTO Peacekeeping Forces called "Indestructible Brotherhood-2020" were prepared and successfully conducted.  For the first time, a command and staff training with the Command of the CSTO Collective Rapid Reaction Forces was conducted on the basis of the airborne troops of the Russian Federation, in the course of which the prospective structure and staff of the CSTO CRRF Command were tested and the purposefulness of the proposed approaches to their optimization was confirmed.
As part of improving the organization of the Acquisition, Technology, and Logistics for CSTO troops (Collective Forces), the Organization's bodies have approved a draft agreement on joint logistical and medical support for CSTO troops (Collective Forces), developed jointly with defense departments. Recommendations on the Acquisition, Technology, and Logistics of the CSTO Troops (Collective Forces) developed jointly with the Military Academy of Acquisition, Technology, and Logistics named after Army General A.V. Khrulev, taking into account modern approaches to organization and conduct of military (combat) operations and their Acquisition, Technology, and Logistics, experience of armed conflicts, joint operational and combat training activities. Work continued on the draft Decision of the CSTO CMD and CSSC "On the Regulation on stockpiling of material resources to provide supplies for formations of the CSTO Troops (Collective Forces)".
It is important that despite the difficulties caused by objective reasons, particularly in 2020, measures aimed at improving the CSTO collective security system have been implemented. Based on the results of joint work, proposals and relevant documents have been prepared in all areas of the CSTO military component. "I express confidence that the unity, mutual understanding and professionalism of the Joint Staff team will allow us to continue to successfully perform the tasks assigned to us," the head of the CSTO Joint Staff, Colonel General Anatoly Sidorov said in congratulating the personnel.