The Chief of the CSTO Joint Staff held a briefing on "The results of joint training of command bodies and formations of the forces and means of the CSTO collective security system in 2021 and tasks for 2022". 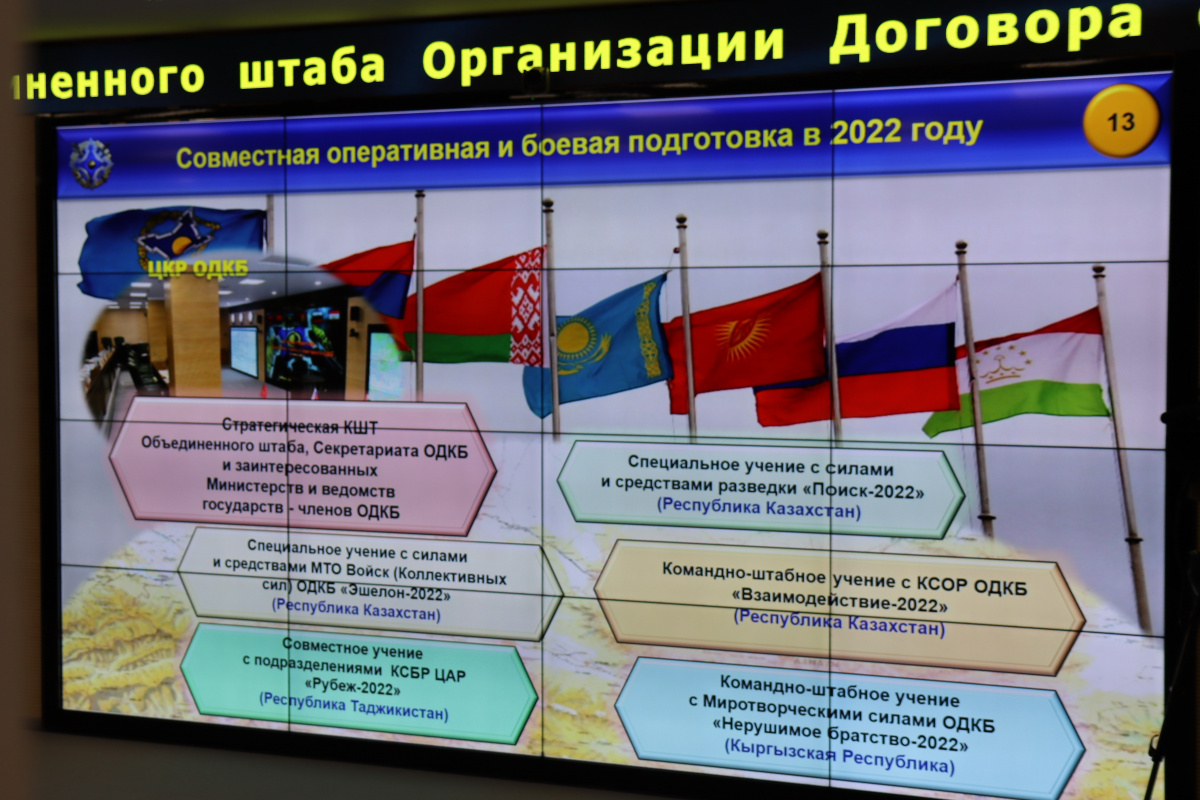 On February 10, this year, at the CSTO Crisis Response Center, the Chief of the CSTO Joint Staff, Colonel General Anatoly Sidorov, held a scheduled briefing for the media on the "Results of joint training of command bodies and formations of the forces and means of the CSTO collective security system in 2021 and tasks for 2022".

In implementing the priorities in the construction and development of the military component of the Organization in 2021, particular attention was paid to joint training of the command bodies and formations of the forces and means of the collective security system to carry out earmarked tasks.

Joint training activities in 2021 were carried out in accordance with the Plan approved by the Decisions of the Organization's bodies for the purpose of maintaining the readiness of the CSTO Troops (Collective Forces) to carry out tasks to ensure collective security.

The main efforts were focused on:

improving the composition of the CSTO Troops (Collective Forces), as well as the organization of their management and comprehensive support of the groups being created;

improving the practical skills of government officials in commanding groups of CSTO Troops (Collective Forces) of the and the coordination of the collective security system in conducting joint (special, peacekeeping) operations;

conducting research on the most topical issues of the development and use of the forces and means of the CSTO collective security system. 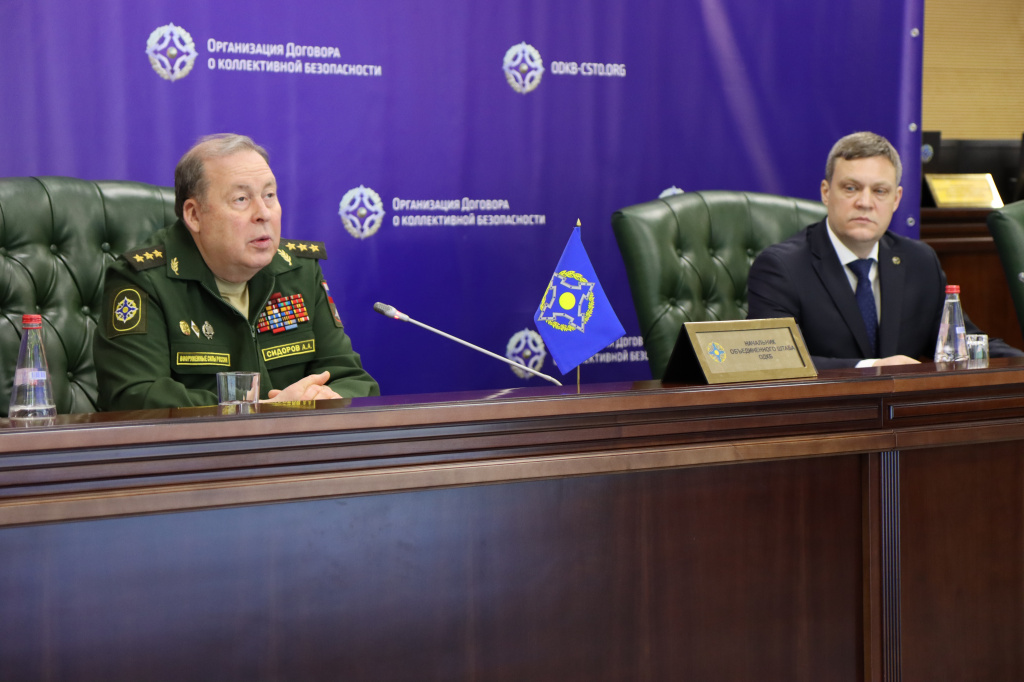 In order to implement the aforementioned areas within the framework of operational and strategic training "Combat Brotherhood-2021" a set of joint trainings was planned and conducted in the Central Asian region of collective security.

In the interests of effective implementation of joint operational and combat training activities, a politico-military training environment was developed that was based on possible variants of developments in the CSTO area of responsibility, considering current challenges and threats.

In September and November, five joint and special trainings were conducted as part of the operational strategic training "Combat Brotherhood-2021".

On the territory of the Kyrgyz Republic there was a joint training with the CAR CRDF "Rubezh-2021". In the course of the training, the issues of preparing a joint military operation and management of the formations of CAR CRDF during its conduct were practiced. The draft projects "Training and Application Framework" and "Model Structure and Staff of the CAR CRDF Command" were tested.

During the preparation of the joint military operation, the CAR CRDF Command and staff showed organized work, which contributed to the timely decision-making, successful planning of the operation, development of combat directive documents and tasking of the CAR CRDF formations.

During the active phase of the joint training, the units practiced the task of blocking and destroying insurgent groups and illegal armed units.

Three trainings were conducted on the territory of the Republic of Tajikistan.

A special training with the for the Acquisition, Technology, and Logistics forces and means of the CSTO Troops (Collective Forces) "Echelon-2021", in the course of which the issues of the organization of Acquisition, Technology, and Logistics as well as the management of logistics units of the CSTO CRRF in a joint operation were practiced in an integrated manner.

The draft "Recommendations on Acquisition, Technology, and Logistics support for CSTO Troops (Collective Forces)" were tested.

In the course of combat training operations, military units and logistics units practically accomplished the tasks of:

Special training with reconnaissance forces "Search-2021". The training focused on intelligence planning in a deteriorating military and political situation, reconnaissance during the blocking and destroying of gangs and illegal armed groups, reconnaissance and special tasks during a joint operation.

The specific features of the training were:

performance of tasks by the reconnaissance control point and command and observation points of the CSTO CRRF reconnaissance units under conditions of enemy use of non-military forms and non-standard methods of warfare;

testing the "crew-free" method of conducting electronic reconnaissance by calculations of the hardware and software systems in cooperation with airborne direction finding teams;

It is noted that all types of reconnaissance (electronic, optical-electronic, radar, air) are used in a single information loop and data are automatically transferred to the command post of the CSTO CRRF.

In the course of the joint training with the CSTO CRRF "Interaction-2021", the issues of organizing a joint operation to localize an armed border conflict, preparing CSTO units for carrying out tasks and conducting a joint operation to block and destroy illegal armed groups were practiced. The draft project for the “Preparation and use of CSTO CRRF” has been tested.

The following tasks were carried out in the course of practical operations:

reconnaissance, including by means of strike drones in order to detect basic training areas of militants, supply and material support points, and the advance of the main forces of the insurgents;

conducting an air strike against an accumulation of the illegal armed groups;

landing of special task forces to destroy retreating groups of the enemy and prevent the approach of enemy reserves to the populated area;

blockading a populated locality, clearing the locality and evacuating civilians;

The "Indestructible Brotherhood-2021" joint training with the CSTO Peacekeeping Forces was conducted on the territory of the Russian Federation. In the course of the training, the entire range of measures for the preparation and conduct of a peacekeeping operation by the CSTO Collective Peacekeeping Forces in the conflict zone was practiced.

In the course of practical operations, military units and subunits of the CSTO CPF carried out tasks to:

control of the ceasefire and organization of the checkpoint regime on the line of demarcation of the conflicting sides;

Ensuring the delivery of humanitarian aid to refugee camps and conflict-affected communities. In the course of escorting the humanitarian convoy, various elements of all-round support were practiced: air cover of the convoy and aerial reconnaissance of the route, demining of the route section, and repulsion of an attack on the convoy.

The training coordinated the implementation of political, informational, socio-legal and humanitarian measures taken to resolve the conflict.

During the Joint Business Game of the Secretariat, the CSTO Joint Staff and operational groups of interested ministries and departments of CSTO member States, efforts were focused on improving the CSTO CRC work algorithm, increasing the effectiveness of interaction between the CSTO CRC and the governing bodies of CSTO member States authorized to interact with it, and improving the practical skills of officials of the CSTO Secretariat and the CSTO Joint Staff who are members of the CSTO CRR functional groups.

elaboration of proposals on priority (joint) political and diplomatic measures, provision of humanitarian, material-technical and other assistance, implementation of other measures necessary for prevention (settlement) of crisis situation in Central Asian region of collective security;

development of draft documents of the CSTO CSC, the CFM, the CMD, and the CSTO CSSC on the deployment and use of CSTO Troops (Collective Forces) to resolve the crisis situation.

Conclusions on the results of joint operational and combat training activities in 2021:

In the course of events:

a wide range of tasks have been developed both for improving crisis response mechanisms in the CSTO area of responsibility and for the use of CSTO Troops (Collective Forces) to resolve them;

demonstrated the readiness of national contingents of CSTO member States to jointly carry out tasks to neutralize threats to collective security;

officials who participated in events as part of the command and control bodies of the components of CSTO Troops (Collective Forces) received practice in organizing joint operations;

the units that took part in the joint trainings showed a high level of coordination and field training of personnel.

The goals of the measures of joint operational and combat training of command and control bodies and formations of the forces and means of collective security determined for 2021 have been achieved, the tasks have been implemented. The practical actions in January of this year in providing assistance to the Republic of Kazakhstan are proof of this. 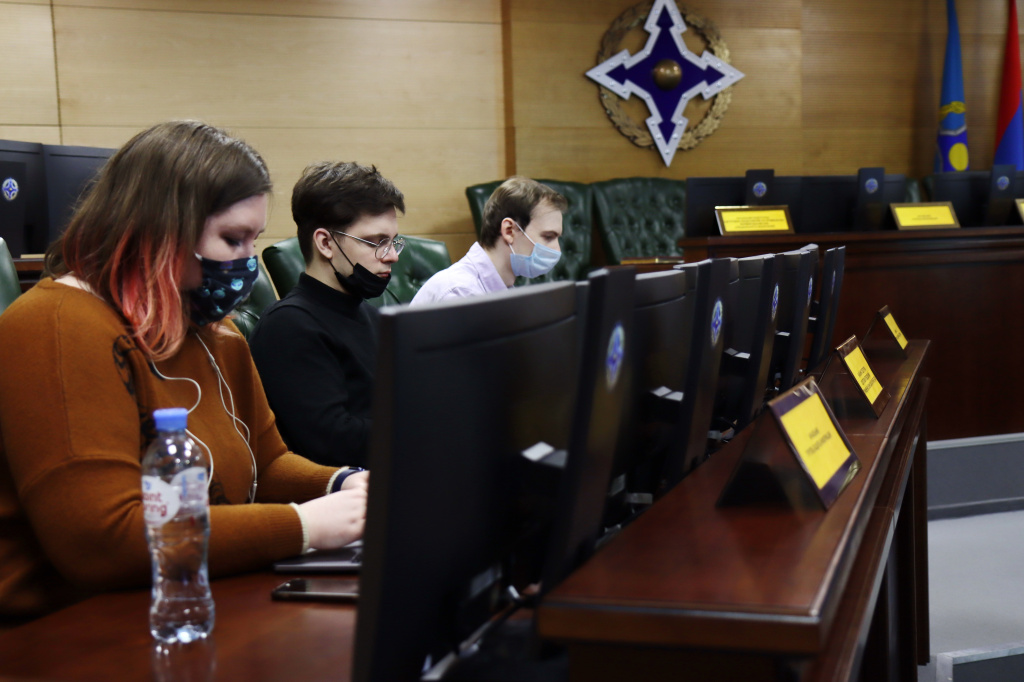 In 2022, the practice of military trainings aimed at increasing the defense potential of the organization, improving combat training, coordination and maintaining the readiness of the CSTO Troops (Collective Forces) to carry out tasks to ensure collective security will continue.

At the same time, joint training of command bodies and formations of the forces and means of collective security system, as in the past year, will be focused on consideration of anti-terrorist topics.

As part of the joint training, a set of activities has been planned:

a strategic command post training led by the Chief of the CSTO Joint Staff. During this training, the CSTO Crisis Response Center, in cooperation with operational groups of interested ministries and departments of states, will examine in detail the factors affecting the state of collective security, forecast the development of the military, political and strategic situation in regions of collective security, determine the likelihood of crisis situations, as well as mechanisms for influencing them;

we plan to conduct joint and special trainings on the territory of the Republic of Kazakhstan, combining the training of various components of the CSTO Troops (Collective Forces):

a special exercise with the Acquisition, Technology, and Logistics forces of the CSTO Troops (Collective Forces) "Echelon-2022";

in the territory of the Republic of Tajikistan, a joint training with units of the CAR CRDF "Rubezh-2022" with training on the use of the forces and means of the CSTO collective security system to counteract international terrorist organizations.

At the final stage on the territory of the Kyrgyz Republic it is planned to hold a command-staff training with the CSTO Peacekeeping Forces "Indestructible Brotherhood-2022", during which the tasks of post-conflict settlement in the crisis zone will be practiced by conducting a peacekeeping operation - using forces and means of the CSTO collective security system in order to maintain international peace and security.

As part of the improvement of information interaction in the format of the Organization, a set of joint trainings of the Crisis Response Center with operational groups of bodies authorized in the states to interact with the CRC was planned.

The Joint Staff, together with the defense departments of the CSTO member States, is working on the option of organizing joint trainings under conditions of possible restrictions.

In conclusion, I should like to draw attention to the purely defensive nature of military co-operation in the CSTO format, which was emphasized in the statements by our heads of state.