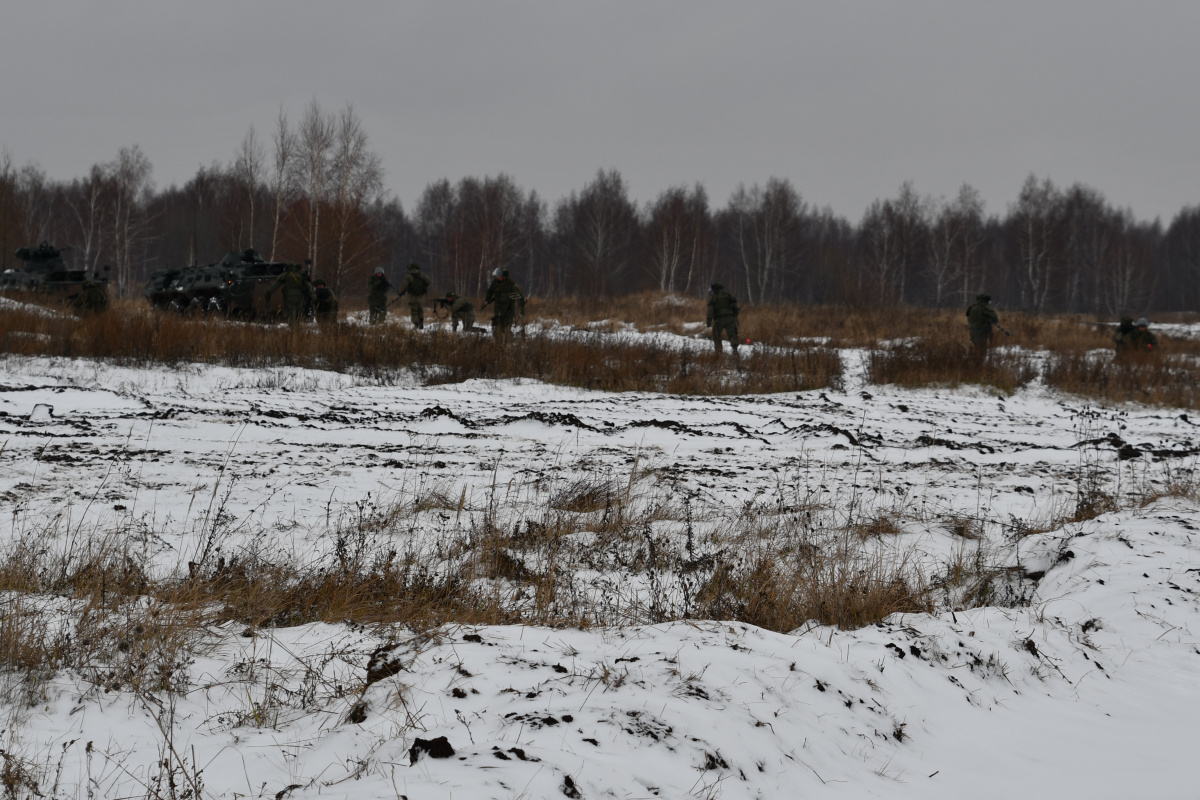 The "Indestructible Brotherhood-2021" joint training in the framework of the "Battle Brotherhood-2021"operational and strategic training was held at the Kazan Higher Tank Command School decorated with the Order of Zhukov training range from November 8 to 12, 2021.

The main tasks were to improve the practical skills of command officials of the CSTO Troops (Collective Forces) in the organization and management of subordinate troops in carrying out earmarked tasks, as well as to increase the coordination of military units and subdivisions included in the CSTO CPF in the course of the peacekeeping operation. 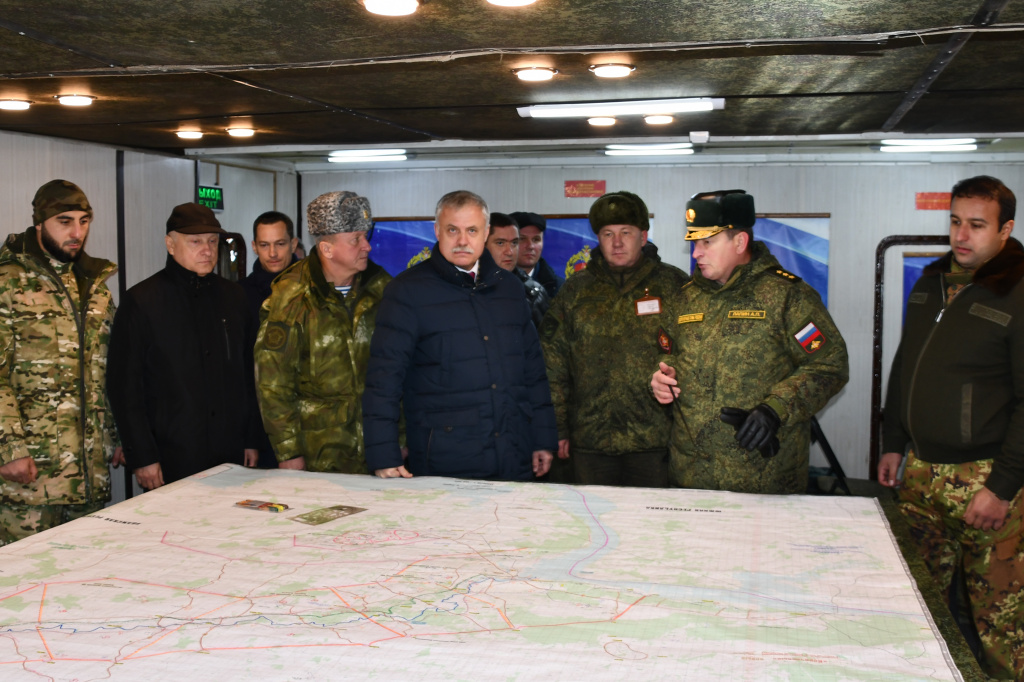 Military contingents of the Organization member States, military police units, formations of internal affairs bodies (police), national guards, as well as authorized bodies in the sphere of prevention and liquidation of consequences of emergency situations, operative groups of the CSTO Joint Staff and the CSTO Secretariat participated in the training under the charge of Colonel General Alexander Lapin, Commander of the troops of the Central Military District. About 1.8 thousand people representing the armed forces and law enforcement bodies of the CSTO member countries and about 300 weapons, including eight helicopters Mi-8 and Mi-24 and two multifunctional fighter-bombers Su-34 of the Central Military District of Russia took part in the training.

In the course of the practical actions, the main efforts of the CSTO Collective Peacekeeping Forces were focused on creating disengagement zones (buffer, demilitarized) and organizing control over the actions of the conflicting parties in order to create conditions for the conclusion of peace agreements.

According to the plan of the training, in accordance with the decision of the Collective Security Council, the CSTO CPF prepared and conducted a peacekeeping operation in the area of responsibility with a depth of 32 kilometers and a width of 98 kilometers.

In the buffer zone, the participants of the training equipped 48 observation posts and 19 checkpoints, as well secured 11 important state facilities. They practiced joint actions at checkpoints and while escorting humanitarian convoys. 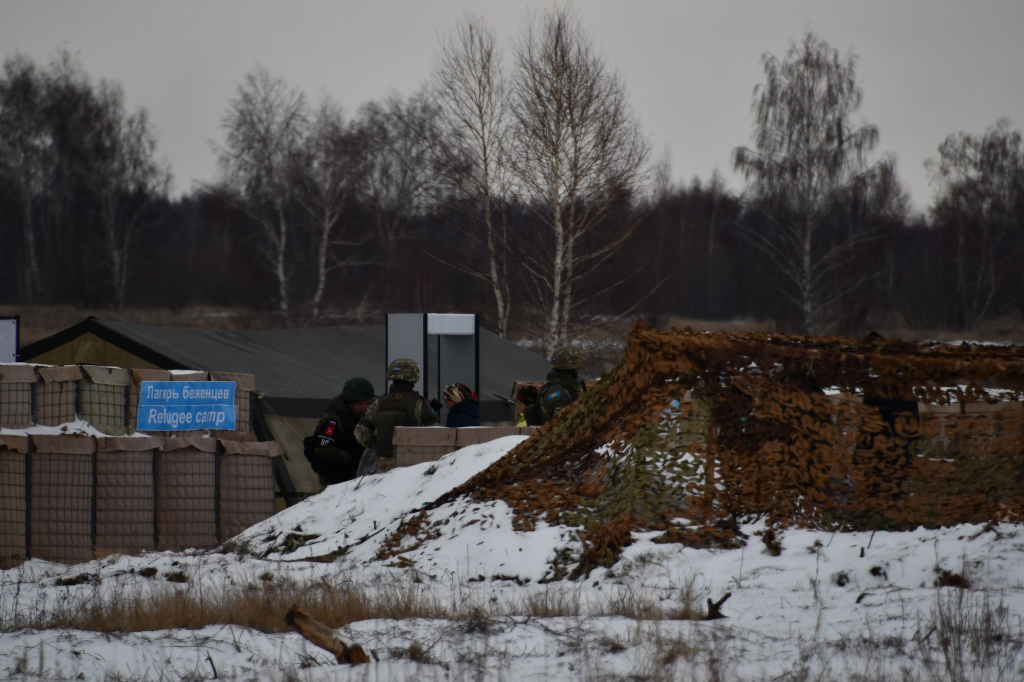 On November 12, the final stage of the training took place, in the course of which a peacekeeping operation was conducted in the area of responsibility. A total of four tactical episodes were played out, during which the units practiced the tasks of post-conflict settlement.

In order to prevent a humanitarian disaster, a refugee camp was set up for civilians. The CSTO Collective Peacekeeping Forces assisted local residents in finding their relatives, provided medical and psychological assistance, and provided temporary accommodation for people forced to leave their homes.

Based on the experience of medical support near Palmyra in the Syrian Arab Republic, a medical checkpoint was deployed at the camp checkpoint to prevent the entry and spread of infectious diseases and to provide qualified medical assistance. In the course of practical operations, an army Mi-8 helicopter escorted by a pair of Mi-24 helicopters delivered medicines and essential supplies to the refugee camp.

In addition to providing security for the refugees in the camp, the CSTO CPF escorted humanitarian convoys. One of the tasks was performed by engineering units, which cleared the road using the "Horseshoe" method. Two engineer squads were assigned to the demining team. A sapper with a dog moved ahead of the main group and searched the entire width of the road. To the right and left of the road, sappers conducted engineering reconnaissance of the area with modern explosive detection equipment – portable inductive mine detectors and non-contact explosive device detector “Korshun”. 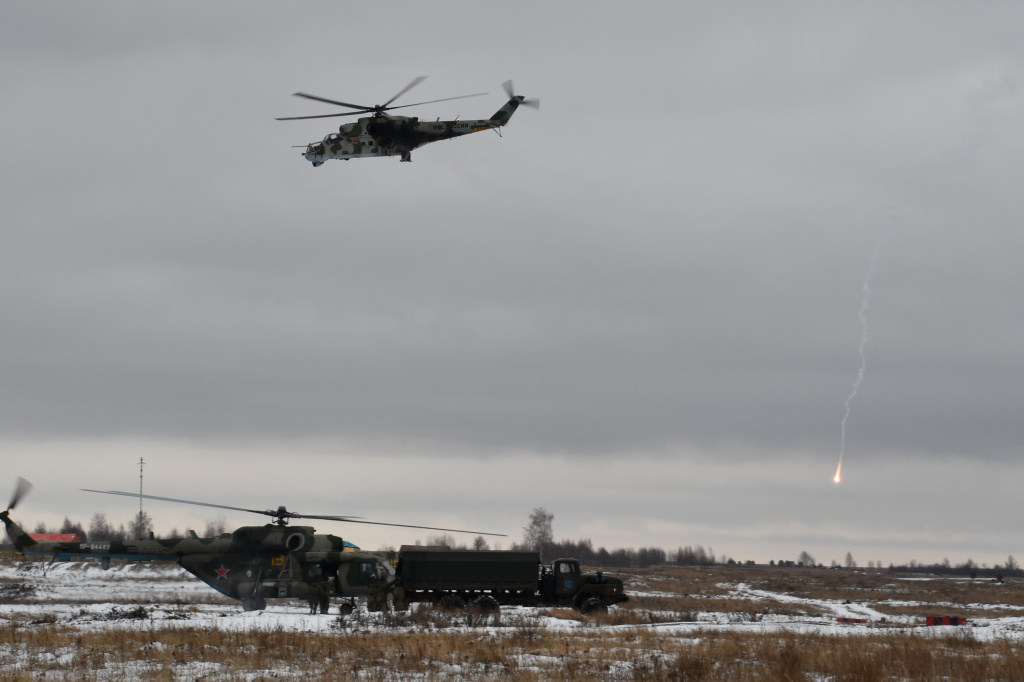 The peacekeepers practiced their tasks of escorting a humanitarian convoy and then repelling an attack by militants. A pair of Mi-24 helicopters of the Central Military District provided air cover for the convoy. For the first time the convoy included the latest “Patrol” armored special vehicle of the military police of the Russian Armed Forces. The vehicle has the fifth protection class. A 12.7 mm “Kord” large-calibre machine gun is mounted on the roof.

In one episode, a unit of illegal armed groups ambushed the convoy with grenade launchers, small arms and large-caliber machine guns. A platoon of Peacekeeping Forces intervened, ensuring that the humanitarian convoy was removed as quickly as possible from the "militants'" fire.

Aerial reconnaissance of the area was performed by the “Orlan-10” strike drone. The use of strike drones made it possible to use weapons as effectively as possible, perform timely maneuvers of units, save ammunition and reduce the time it takes to hit a target.

A pair of army Mi-24 attack helicopters carried out air strikes against a convoy of reserve insurgent groups in “Pickup” trucks armed with large-caliber machine guns.

Two Mi-8 helicopters covered by a pair of attack helicopters of army aviation landed in the area of the village to prevent the activities of the band formations' reserve. The Interior Ministry's Special Forces group took over the specified area and, in cooperation with the Peacekeeping Forces' military units, proceeded to hit the reserves of illegal armed formations with all kinds of weapons, and searched and seized the surviving fighters.

Meanwhile, at one of the checkpoints of the CSTO Collective Peacekeeping Forces, during the inspection of citizens entering the buffer zone by vehicles, leaders of extremist and terrorist organizations, using the hostile local population, organized an unsanctioned rally. In order to find out the intentions of the protesters, peacekeepers entered into negotiations. A group of psychologists, using an OZS-78 "Komar" sound-broadcasting station, urged the protesters to order and refrain from unlawful actions. A military police unit of the Armed Forces of the Russian Federation and the Interior Ministry troops of the Republic of Belarus, armed with special means and equipped with special outfit, prepared to counteract mass disorder, got into action. The latest Russian-made “Tiger” special-purpose vehicles ensured their mobility to the post. 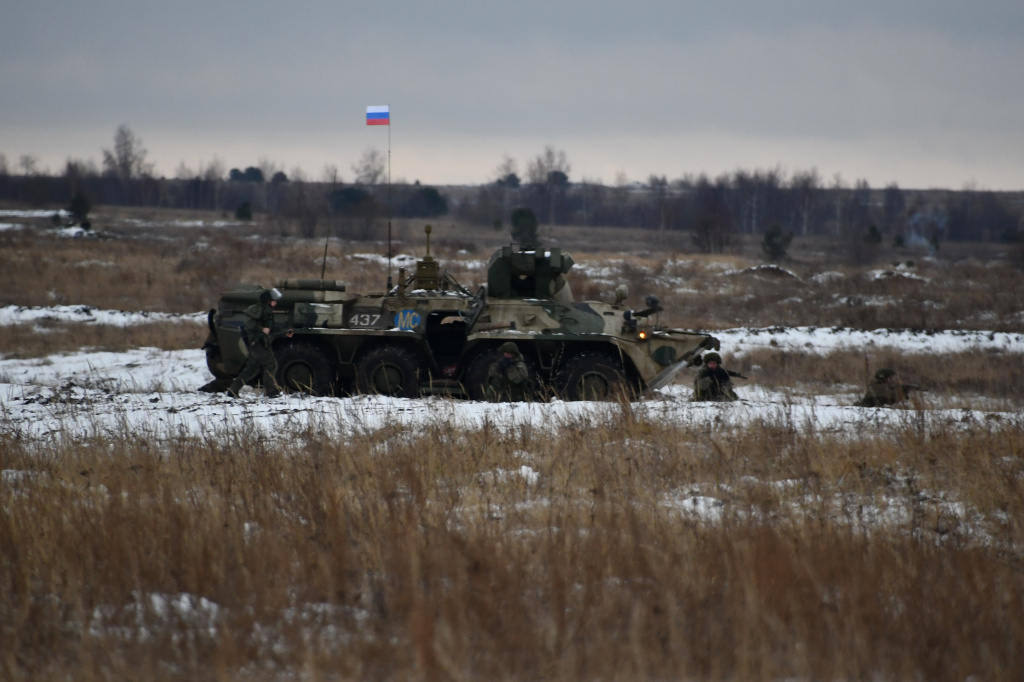 After discovering the quadcopter's launch direction, the maneuvering electronic warfare team spot-checked it with the “Harpoon-3” manual countermeasures system. The jamming signal blocked the control channel of the strike drone, forcing the quadcopter to make an emergency landing.

After which a group of "insurgents" opened mortar fire on the peacekeepers' positions. The peacekeepers immediately set up a 360-degree defense position according to their battle plan. A defensive guided weapon team guided missile system destroyed the identified suicide vehicle.

Through the Ministry of Emergency Situations, the local government received information about the threat to the civilian population posed by illegal gangs. A decision was made to evacuate people. The population was evacuated accompanied by a military vehicle inspection. After which a unit of up to fifty "militants" advanced in cross-country vehicles equipped with large-caliber machine guns and seized the settlement.

In the course of their takeover, the militants posted guards, organized patrols by car, occupied houses and buildings, mined access roads and facilities, and equipped mortar and firing positions. 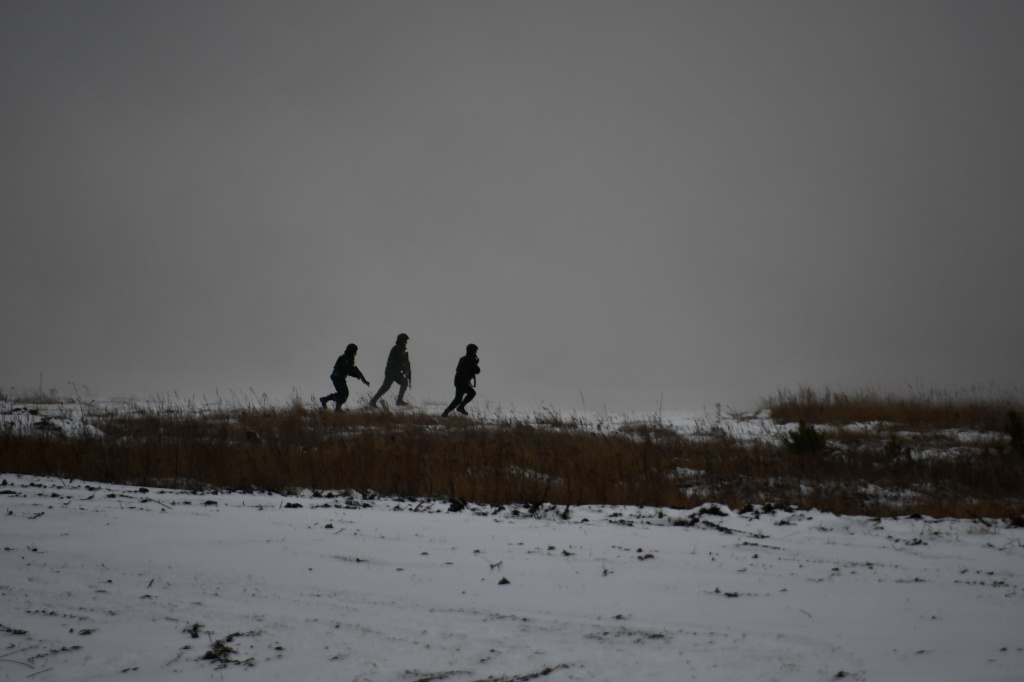 The blocking consisted in isolating a populated area occupied by the enemy along a certain line, preventing the enemy from leaving the populated area and creating favorable conditions for his detention.

After the units reached these positions, the combined use of electronic warfare equipment from the maneuver group, using a virtual base station and the "electronic blocking" method of disrupting enemy control, they suppressed mobile cellular subscribers and radio communication channels.

A group of psychologists using a mobile sound-broadcasting station "Linguist" delivered an ultimatum to the commander of the peacekeeping battalion in the Russian language. In addition, in order to increase the psychological impact on the band formations, agitation leaflets are being dropped using a “MAVRIC” strike drone.

The fighters continued their stubborn resistance and began firing at the positions of the Peacekeeping Forces. A pair of Su-34 fighter-bombers set out on a combat heading to hit critical enemy targets. Bombing strikes were carried out simultaneously against different targets using high-explosive fragmentation aerial bombs. The peacekeepers' battalion commander also decided to use army aviation to carry out the strike. Two pairs of Russian Mi-24 helicopters struck the bandits' firing points in the village. 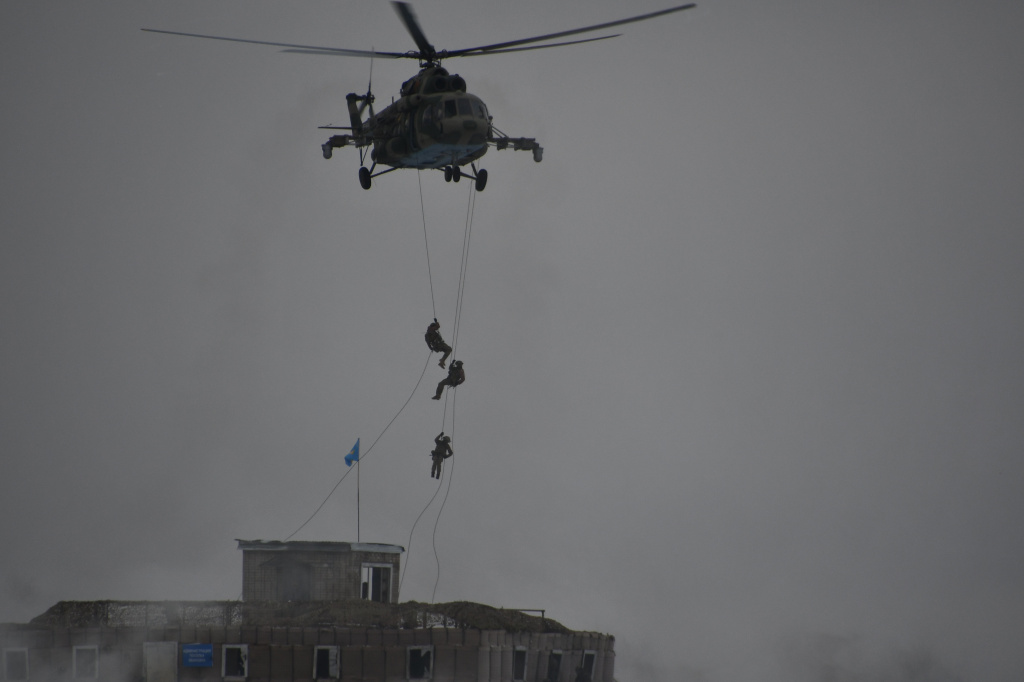 The actions of the Collective Peacekeeping Forces forced the insurgents to retreat deep into the village. Gradually retreating, the fighters consolidated their hold on the administration building. An engineering assault platoon of the Russian Federation and assault groups of the Interior Ministry troops of the Republic of Belarus and the Republic of Armenia moved forward to the building, which had been occupied by the militants. The assault groups were covered by machine gunners and sniper pairs.

Supported by a pair of Mi-24 helicopters, an Mi-8 helicopter also landed on the roof of the administration building, using a parachute-less drop from 35 meters.

The assault was followed by the evacuation of a soldier who had been wounded in the storming of the administration by a new “Lens” tactical armored vehicle. 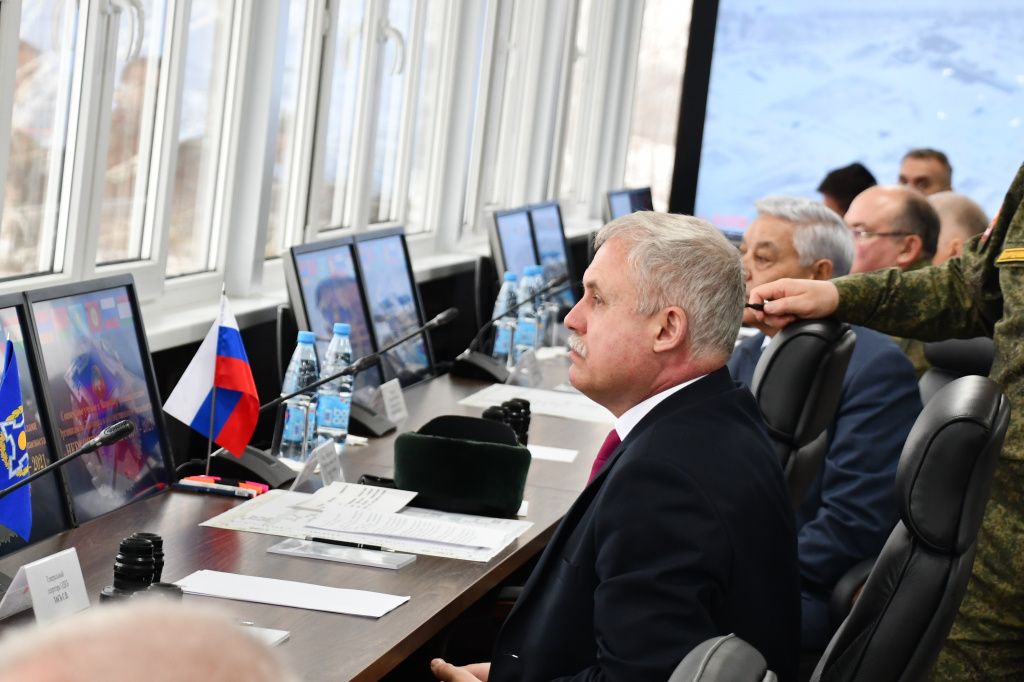 "All participants in this event demonstrated the ability to act professionally in a united formation in a complex, rapidly changing environment. Today peacekeeping is one of the priorities of the development of the Organization. We are therefore adjusting the composition of peacekeeping contingents and improving the system of their training. Efforts are being made to integrate CSTO peacekeeping potential into the UN activity," Stanislav Zas said.

The final stage of the training was attended by Farid Mukhametshin, Chairman of the State Council of the Republic of Tatarstan, and Colonel General Anatoly Sidorov, Chief of the CSTO Joint Staff. Representatives of the CSTO Parliamentary Assembly, high-ranking military officers from the Republic of Serbia, and representatives of the International Committee of the Red Cross and the OSCE were present as observers. 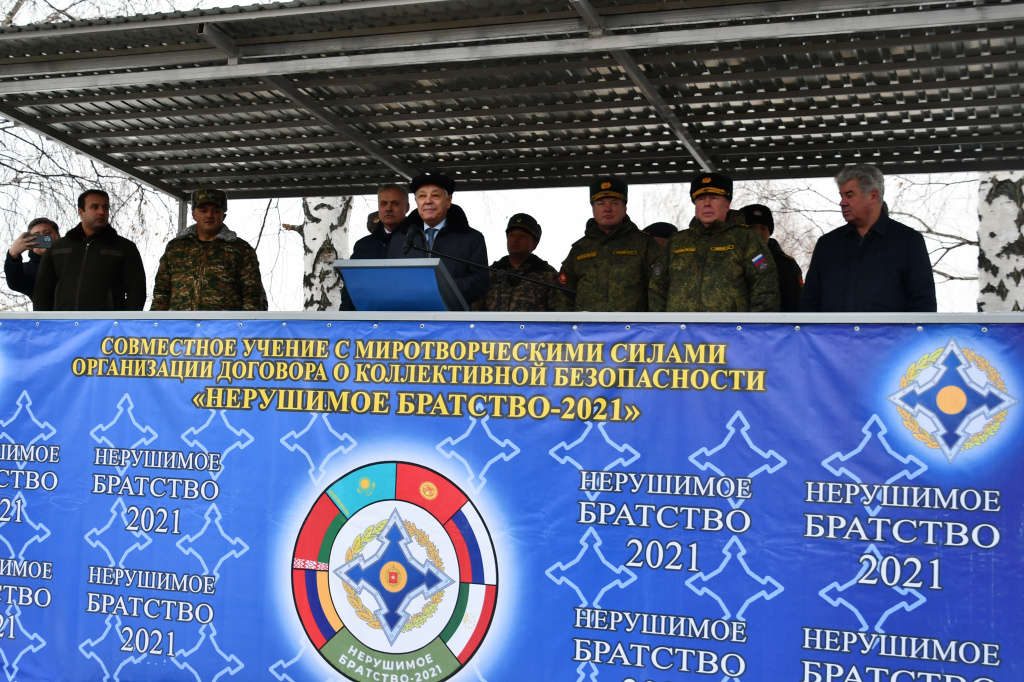 The Joint Press Center of the "Indestructible Brotherhood 2021" training, Kazan